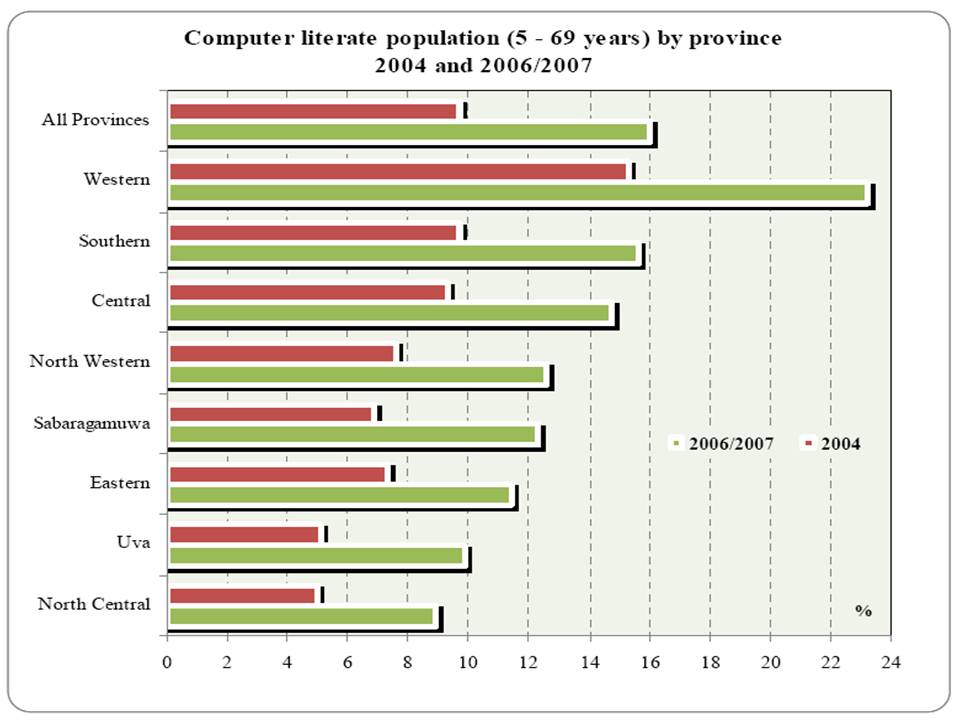 What is the correct computer literacy figure in Sri Lanka? Is there one figure? We ask this because we hear different answers.

According to HE the President of Sri Lanka it is pretty impressive at 25%. This what he said in the 60th Independence day speech as reported by Daily News the next day:

“We have given our nation every opportunity to link with the technologically developed world. We have been able to raise computer literacy in the country to 25% without trumpeting about it, in a country that did not attach much importance to it.”

(Relevant part of President speech is also available at: http://www.youtube.com/watch?v=7con4XljkSE)

The apex body for ICT related matters in Sri Lanka, Information and Communication Technology Agency (ICTA) seems not in agreement with the President. It estimates Computer Literacy to be between 15%-20%. That was what ICTA Consultant J.K Perera told Daily News nearly one year ago. He also said once only the Western Province contributed to the country’s IT literacy level, but now there is a significant growth among rural communities.

20% should be the ‘official’ figure of ICTA because it is the figure also reported by Swarnawahini, covering the launch of Sinhalised Firefox, but one may not take it seriously because they also attributed development of Firefox to ICTA.

Department of Census and Statistics, Sri Lanka tells a very different story. (See Graph above) Recently conducted Computer literacy survey put this figure at 16% in 2007 only a 6% improvement (from 10% to 16%) since 2004. (An online summary)

The survey also refutes the typical claim by ICTA that Computer Literacy has improved among rural communities because of its Nenasala network.

These statistics certainly do not reflect the characteristics of a country with high computer literacy.

Can somebody enlighten us please? What is the correct Computer Literacy rate in Sri Lanka? 25%, 20% or 16%?