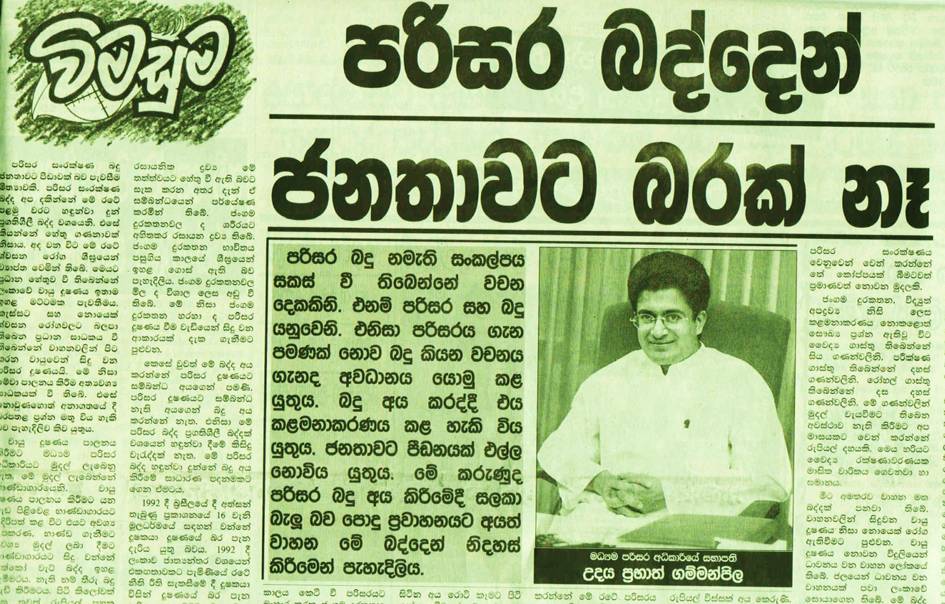 Responding to Rohan Samarajiva’s views on newly implemented Environmental levy in Lankadeepa last week, Central Environmental Authority Chairman Udaya Gammanpila calls it essential and the ‘first progressive tax’ in Sri Lanka. Assuring it does not burden public, he says any tax can be initially unpopular but the impact should be seen in long term. (Lankadeepa, August 19, 2008)

These are his points in brief:

1. If not for the Environmental levy, the government has to find money to address environmental issues by increasing either VAT or customs charges. That will raise prices in general. It is unfair. Why should villagers who have never seen a mobile phone contribute for its removal whenever they buy flour to make rotis? Instead we have introduced a tax only on pollutants. So only the culprits pay for remedial measures.

2. Mobile phone usage has drastically increased during the last few years. Now there are about 8 million mobile phones in Sri Lanka. (sic) The cost of a mobile phone was reduced from Rs. 75,000 in 1994 to Rs. 3,500. These have made the lifetime of a mobile phone shorter and more mobile phones are being released to the environment. (sic) Our intention is to build a recycling plant for e-waste. Such plants can be seen in India and Singapore.

3. Why we tax mobile usage? Because it is one commodity the prices have fallen during the last 15 years. In 1994 an incoming call was charged at Rs. 20 and outgoing at Rs. 30 per minute. Today incoming is free while outgoing is Rs. 4-5 per minute. How can one allege us insensitive to Cost of Living?

4. Before complaining about these taxes one should note their actual impact. 90% of Sri Lankan mobile subscribers are pre-paid. The average revenue per unit of a prepaid account is Rs. 360. Let us assume it to be Rs. 500. Two percent of that is Rs. 10 per month. That is all we ask to protect environment. Is this adequate even for a cup of tea?

5. Atmospheric pollution in Sri Lanka is too high. The tax on motor vehicles is meant to control this. Vehicles are taxed only if they pollute. If they run on electricity or water (sic) no levy is applicable. The levy is proportionate to the level of pollution. Vehicles such as buses, lorries and three-wheelers are exempted on Cost of Living considerations.

6. CFL bulbs solve one environmental problem, but their release to environment causes another. So we need to collect the used CFL batteries for recycling. A Denmark company has agreed to setup a recycling plant if we ensure enough input. We believe taxing 3% on non-CFL bulbs will make CFL bulbs more popular.

7. Tower tax is meant to encourage telecom operators to share towers. That has no effect on Cost of Living.

8. The money collected will be credited to a special environmental fund. Ministers of Finance and Environment have to annually report on this to the parliament. This ensures tax money will be used solely for environmental protection purposes.

(We open the discussion to our readers.)