While some Asia-Pacific economies are world leaders in information and communication technologies (ICT) where broadband access is ultra-high speed, affordable and close to ubiquitous, in most of the region’s poorer countries Internet access remains limited and predominantly low-speed.

This is what ITU’s Telecommunication/ICT Indicators Report for the Asia-Pacific region 2008 says. It was released at ITU TELECOM ASIA 2008, Bangkok, Thailand yesterday (Sept 2, 2008).

The Report finds evidence that ICTs and broadband uptake foster growth and development, but the question remains as to the optimal speed that should be targeted in view of limited resources.

The area in which the region really stands out is the uptake of advanced Internet technologies, especially broadband Internet access. The Asia-Pacific region is the world’s largest broadband market with a 39 per cent share of the world’s total at the end of 2007. In terms of broadband access, Asia-Pacific has made remarkable progress in the past few years, with subscriber numbers growing almost five-fold in five years: from 27 million at the beginning of 2003 to 133 million at the start of 2008.

In the region’s high-income economies, ubiquitous access is progressing through a competitive race to provide ever faster fixed broadband access. Operators in Hong Kong (China) and Japan have launched one-Gigabits per second (Gbps) broadband and triple-play services aimed at the residential market, featuring applications such as Internet telephony and television. The Republic of Korea leads the world in terms of the percentage of households with fixed broadband access, and no less than five economies in the top ten are from Asia-Pacific. The Republic of Korea, Hong Kong (China), and Japan also lead the world in terms of the proportion of households with fibre optic connections, essential for supporting the next generation of ultra-high speed Internet applications.

At the other extreme, in most of the region’s low and lower-middle income economies, high-speed Internet access is limited to urban areas at best, typically expensive, and often not available at all. The regional broadband divide is striking, with poor economies having a close-to-zero broadband penetration, compared to that of rich economies where one in four persons is a broadband subscriber (Figure 1). 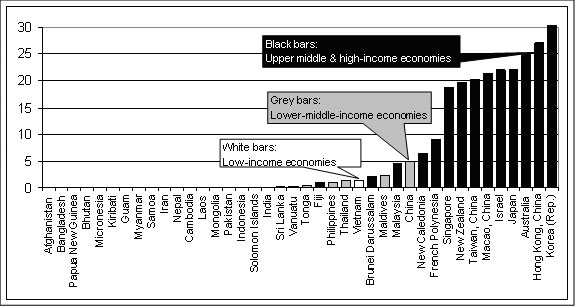 The gap in available broadband speeds between rich and poor countries is as wide as broadband penetration. In Japan, the Republic of Korea and Hong Kong (China), the minimum advertised broadband speed is faster than the maximum broadband speed in Cambodia, Tonga, Laos and Bangladesh.

While in low and lower-middle income economies mobile phones have become a substitute for the shortage of fixed lines, they are not yet fulfilling the potential of broadband access. By the end of 2007, only Indonesia, the Maldives, the Philippines and Sri Lanka had commercially deployed WCDMA networks. The region’s two largest mobile markets, China and India, have yet to launch mobile broadband. By the end of 2007, there were over 120 million mobile broadband subscribers in the region (Figure 2), but almost all (97 per cent) were in high income economies. 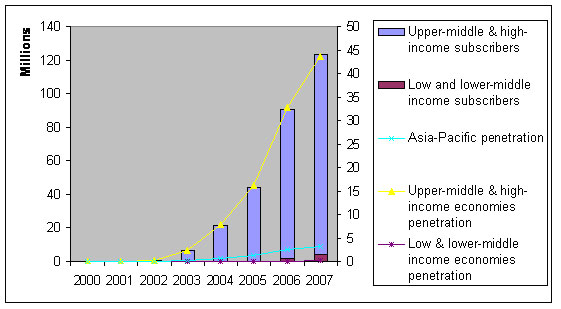 While the region’s high-income economies are pushing the frontier of broadband bandwidth to a point where applications have yet to catch up, many Asia-Pacific developing economies are bandwidth starved, inhibiting the development of their information societies.

The ITU Report argues that broadband uptake enables a range of socially desirable and valuable online services in areas such as government, education and health. The use of broadband technologies can help overcome many of the basic development challenges faced by poor countries. The Report provides a number of examples where broadband connectivity has acted as a catalyst for development. These include the provision of education through distance learning in the Solomon Islands, the creation of jobs through business incubators for women in China, and the supply of communication services for disaster management in Myanmar.

Read the press release here. Full report is not yet available in the public domain.

(Please click on the images for a better view)