Connecting the unconnected and more at ITU Telecom Asia 2008 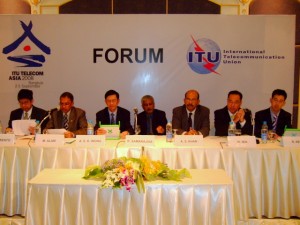 I had the opportunity of chairing a panel of seven persons from various parts of Asia at the Forum at ITU Telecom Asia 2008 in Bangkok.  After we got around the inane title of Manga for the masses, we had a decent discussion, focussing on the aspects of connecting the unconnected, assuring adequate quality to the connected, and content.   My overview slides setting the frame are here.

Contrary to expectation, the Chairman of the Bangladesh Telecom Regulatory Commission, representing perhaps one of the least connected of the countries of Asia, talked about using universal service funds to develop content.   Several people referred to the counter-productive nature of universal service taxes, wherein poor people were being taxed to provide services to poor people, yet those taxes were not being utilized, wisely or otherwise.   I personally was relieved to hear that the Bangladesh universal service fund is still under consideration, and not a done deal.

On the subject of taxes, we had an interesting intervention from the floor, when Professor Howard Williams, the Acting Head of ITU Telecom Forum, intervened from the floor in defense of taxes being imposed on the telecom sector.   One assumes that he was working off the misconception that the objections were to ALL taxes on telecom services, and not on punitive mobile-only taxes, including universal-service taxes.  I clarified this.   It would indeed be a dark day when the ITU starts defending punitive taxes being imposed on telecom services.

Immediately after this session, I attended another session that addressed a topic we had done considerable research on, and which was said to be one of the ITU Secretary General’s three top issues:  Emergency telecom and relief.  This was, as I told the head of the ITU Telecom Board, the worst session I had ever attended at an ITU Telecom event.   After hearing many, if not all, the speakers refer to the role that telecom could play in early warning, I asked a simple question about cell broadcasting, with reference to the Maldives.   Pretty much no one on the panel knew what cell broadcasting was, but they answered nevertheless.

Why, when it has in-house expertise in early warning technologies, the ITU puts a non-specialist political official to read a prepared speech at major session, is a mystery to me.   The Thai speaker knew what he was talking about, and more importantly, stuck his area of expertise.  But I was truly disappointed in the rest.