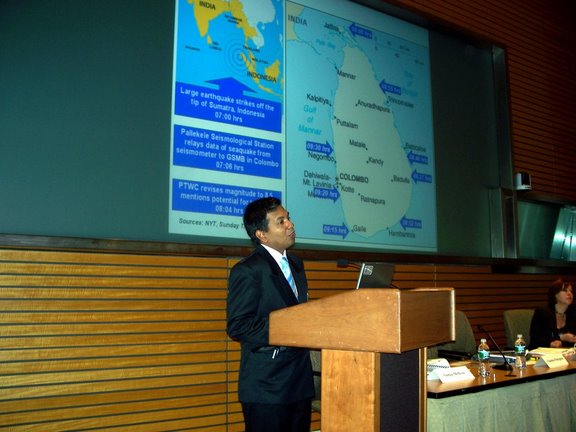 “We must realize the fact that disasters threaten sustained economic growth of the society and the country.”

On the other side of the border Congress President Sonia Gandhi has said there is a need of effective disaster management to mitigate the woes of the people in future calamities, with floods affecting several districts of Bihar and other parts of the country. “The people of India have contributed generously to our relief efforts but we need to strengthen and streamline our responses to all disasters and ensure that rehabilitation of the flood-affected continues on a war footing,” Gandhi said in her “Letter to Congresspersons” in the latest issue of party mouthpiece ‘Congress Sandesh’.

More or less the same sentiments but in a more action oriented manner were expressed at Washington DC at the two day workshop on ‘Disaster Risk Management in the Information Age’ on Oct 8-9.

I made two presentations. The first one, the opening remarks, was more a panoramic view how ICTs can be used in different phases of disaster management, while the second one focused on two projects, Sahana by Lanka Software foundation and our own Haz-Info – a pilot for a Community based Early Warning System.

More details with presentation slides of all speakers are available here.