Mumbai attacks and the role of media: Television to Twitter 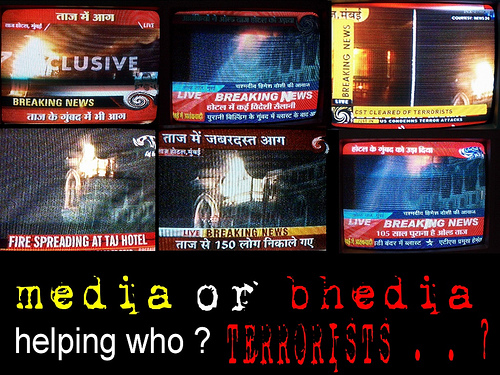 As usual, media is blamed for their role in Mumbai. Unconfirmed reports claimed the terrorists trapped in Taj Mahal Palace constantly watched TV for news and they might have got a feeling of excitement if not ideas from the live coverage. Stupid guys. They never knew what they missed. The best ball-by-ball coverage was hardly on TV but on Twitter, anybody could have accessed thru a mobile. (Twitter added hashtags to terms like ‘Mumbai’ and ‘Attack’) Indian government at one stage requested ‘Twitters’ not to tweet anything about police activity, but it was more because the mainstream media too started depending on them rather than their own paid correspondents.

However, unlike in case of 9/11 no mobile based interactions with the victims were heard – which was bit surprising given the increasing mobile use in India.

There were also reports that the terrorists accessed British news sites using Black Berries. Well, on second thoughts, they might even have had a quick look at tweets – before being gunned down.