Should telcos abandon the BOP market? 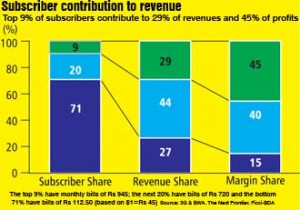 An article published by the Business Standard, India, states that telecom operators should focus on their most profitable customers, those at the top of the pyramid or TOP, instead of following bottom of the pyramid (BOP)-focused strategies. The article cites a study by BDA, a consulting firm in India, which finds that the TOP contributes a greater percentage to revenue than their lower-income counterparts.

An interesting debate has ensued, here and here,  on the economics of serving the BOP. Although such figures appear to economically justify abandoning BOP-focused telecom strategies, some argue that there seems to be more to the picture than first meets the eye.

Rob Katz of Nextbillion.net argues that while the BOP might not be higher-end consumers just yet, they very well could represent the future middle class, and hence, bringing customers into the fold now, could make more sense than ignoring them altogether.

Furthermore, Rohan Samarajiva argues that a new set of business models to serving the BOP market is emerging which rests less on ARPU than on maximizing revenue-yielding minutes. Such models have enabled operators to achieve falling unit costs and hence higher mobile use, more so than might have been achieved with models serving the TOP.

More on the TOP vs. BOP discussion is available here.