At the “multi-year expert meeting” on services, development and trade: the regulatory and institutional dimension, organized by UNCTAD in Geneva, there was rich discussion on the increasing importance of regulation in an environment in which services trade is assuming greater importance. 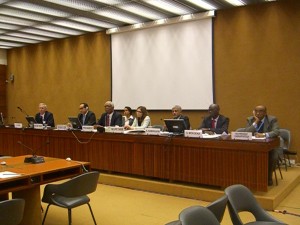 As attention shifts to services trade (for example, the most important element of the proposed Comprehensive Economic Partnership Agreement between India and Sri Lanka, is the services chapter), there is of necessity a need to start looking at regulatory restrictions on services trade. Tariffs do not apply to services, so the only barriers are opaque, arbitrary and discriminatory regulatory provisions. This has been well recognized in telecom, with the reference paper on regulation being one of the key contributions to liberalization made by the GATS. The issue being raised at the UNCTAD meeting was whether there was value in exploring the regulatory aspects of trade in other infrastructure services. With electricity being traded across borders in pools and otherwise (Bhutan and Nepal have been trading electricity with India for a long time; if the proposed undersea cable goes through there will be trade between India and Sri Lanka as well), it is becoming clear that trade in infrastructure services is rising on the agenda.

In my concluding contribution I suggested that the focus that has already been there within the regulatory field on reducing regulatory risk and the international trade focus on removing barriers to Mode 3 (investment-based) trade in services suggests a good area for work by UNCTAD.

One reason I accepted the invitation was that UNCTAD had originally contacted four LIRNEasia researchers: Helani Galpaya, Malathy Knight, Payal Malik, and myself. That four people from LIRNEasia have been picked up on the UNCTAD radar screen, especially when we had no connections with that organization, speaks well for the reputation we have built for our researchers in the past four years.

LIRNEasia conducted a forum in mid-December 2021 focusing on tackling disinformation.

Access to education became a widespread concern with the onset of the COVID-19 crisis. And rightly so.