Putting T-Cube to the test

“Leptospirosis is out and Dengue is in” – these are the words of the Sarvodaya Research Assistant – Pubudini weerakoon – working in Kurunegala District of Sri Lanka on the real-time biosurveillance program (RTBP). This report on Leptospirosis in Sri Lanka gives a full account of the past events. 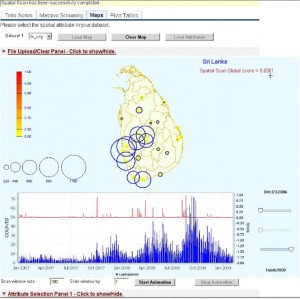 The aim of the RTBP is to gather patient case information through the m-Healthsurvey mobile application and subject that data to real time analysis for rapid detection of emerging health events. The automated analytic and detection is driven by the T-Cube software, developed by Carnegie Mellon Universities Auton Lab, based on data mining principles. We took the weekly epidemiological reports (WER) from the past two years and put T-Cube to the test. The graphic shows T-Cube’s spatial scan snapshot of Leptospirosis outbreak and spread being detected in October 2008. However, the Sri Lankan health officials identified the outbreak and anounced it in December of 2008. 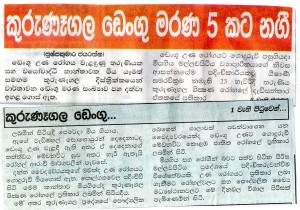 Now the Public Health Officials are hammered with a Dengue outbreak. The news paper clipping reads “5 deaths in Kurunegala”, which is the district RTBP pilot is being carried out. Dengue does emerge time to time in small dozes in Sri Lanka during the rainy season. However, this year has shown a drastic increase of deaths and cases. By collecting syndrome information in real time through ubiquiteous mobile techlogy and applying T-Cube software, health officials will be able to detect adverse events much faster andearlier than they do through snail mail paper based reporting and manual analysis processes. Given that Dengue requires preventive measures to contain the outbreak opposed to curative actions, it is important that health officials detect these events well in advance to apply the preventive remedies before the disease reaches a tipping point.