An article, co-authored by Rohan Samarajiva and Payal Malik, has been published in India’s Financial Express. The article discusses findings from LIRNEasia’s Teleuse@BOP3 project. Read the full article here.

Just five years ago, the Indian telecom industry=barely included the poor. The country had a teledensity of 7/100 people, but in rural India 100 people were served by only 1.5 phones. Even in urban India, the poor were unconnected. Now, the picture is different. Even though the rural-urbandivide remains, with rural teledensity of 13% lagging far behind urban teledensity of 81%,massive progress has been achieved. 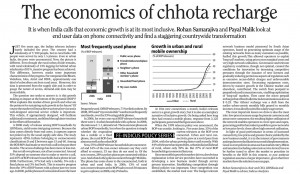 A 2008 study of teleuse among BOP households by LIRNEasia, yields some intriguing answers. Because the data comes directly from end-users, it captures aspects not picked up by the usual supply-side data. The study represents 429 million Indians belonging to socioeconomic classifications Dand E between ages 15 and 60. Among the BOP, 86% had made or received a call in the past three months.The access challenge has been more or less met.