Harsha de Silva: A policy intellectual moves to the next level 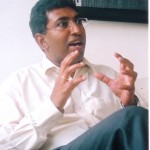 The broad objective of LIRNEasia is to bring evidence to the policy process and thereby improve it. The means by which we achieve this objective range from directly taking evidence to the policy process, through advocacy and dissemination, to building up policy intellectuals. We never quite thought that the means would extend to actually placing researchers within the supreme legislative body of a country, but with the entry of Dr Harsha de Silva to the Parliament of Sri Lanka representing the United National Front, the principal opposition party, this too has happened.

We warmly congratulate Harsha and wish him the very best in continuing to improve policy discourse in Sri Lanka by bringing evidence to bear on the important questions that face our country.

Harsha has been an exemplary policy intellectual, though much of his policy advocacy has occurred outside the framework of his work as LIRNEasia’s Lead Economist. He had the greatest impact in contributing to the shifting of the frame for discussing inflation in Sri Lanka from the misguided focus on imported inflation to one that correctly places the actions of the Central Bank and the now commonly understood term, money printing, at the center. His persistence paid off; his words made into the discussions of the Monetary Board. He was called names, but the Central Bank corrected itself.

Harsha’s interventions, along with those of Fuss Budget in LBO, served the country well. In particular business and the asset-poor benefited. While LIRNEasia would like to take credit for this stunning achievement, it cannot. Harsha did it in his spare time. Macro economics falls outside the remit of LIRNEasia, however broadly defined.

His next great achievement was in advancing the understanding of the role of information in agricultural markets and contributing to well-designed applications that mobilize ICTs, especially the now almost ubiquitous mobiles, to reduce the frictions that characterize the agricultural value chains.

Here, LIRNEasia has played a role, but we cannot claim credit for getting Harsha started on this path, or even for the majority of the work. He started investigating the functioning of a specialized agricultural market, the market for tea, back around 2000, before LIRNEasia had even been thought about. He was responsible for one of the successful pilot projects funded under the eSri Lanka initiative, in 2003.

This was the beginning of Govi Gnana Seva (GGS), centered on the Dedicated Economic Center in Dambulla, the country’s largest wholesale market for agricultural produce. ICTA was very pleased with the success of the project, especially when it received the highest evaluation. But the funding did not continue. Harsha kept the project going, paying the salaries of the workers out of his own pocket and twisting the arms of companies and organizations to assist with some of the technical functions. While the project could not be continued at the previous levels, the basic data collection continued, with GGS becoming the source of daily price reports given out by Sirasa FM and being even picked up for free by government organizations.

It was at this point that LIRNEasia entered the picture, funding some exploratory research on transaction and information costs in agri-markets in the Dambulla area. The research got written up, people started citing Harsha in papers and proposals, and appointing Harsha to international research advisory boards and such. Now some of the key ideas developed in this stream of research are being incorporated into the design of commercial services. Another great achievement of Harsha the policy intellectual.

But the work of a policy intellectual is never done. The UNF manifesto included a section on the necessity for forward contracts and better market design in agriculture. Without question, the policy debate has to be shifted from the easy focus on spot markets to forward markets. We know that Harsha will use the bully pulpit afforded by his seat in Parliament to advance the debate on improving agricultural value chains and ensuring that the people who grow our food do not remain in poverty. Inflation is creeping up again and Harsha’s informed voice is still needed on the macro-economic front.

We wish Harsha well and look forward to continuing our mutually supportive relationship. I hope he will consent to continue as our part-time lead economist.

We congratulate the Leader of the Opposition on his decision to include professionals such as Dr Harsha de Silva and Mr Eran Wickramaratne (the founding Chair of the ICT Agency and a key proponent of the eSri Lanka initiative) in the National List, honoring the intent of the Constitution. We urge the President and the ruling party to draw upon their considerable knowledge and experience to solve the pressing problems besetting our people.