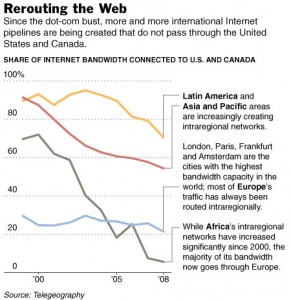 Two years ago the New York Times reported that global internet traffic has been increasingly avoiding the United States. It means the US intelligence establishments were increasingly losing control over the other countries’ cyber data. That was the twilight of George Bush 2.0 era.

Now the US and 39 or more countries are secretly negotiating a new global agreement called Anti-Counterfeiting Trade Agreement (ACTA).

The objective of ACTA is suspected of exporting the flawed US Digital Millennium Copyright Act worldwide. ACTA fanatically favor only the copyright holders more. It legally forces the Internet Service Providers (ISPs) to act as de facto “copyright cops” and be made responsible for “disabling access” to web sites deemed by various unelected and unaccountable vested interests to be carrying counterfeit or pirated content. Digital right adviocates and Technology companies have criticised this secretive move.

Rob Pegoraro wrote in the Washington Post, “This proposed agreement is what I thought it was: an intellectual-property land grab that would cement some of the uglier aspects of American law, export those provisions to other countries, possibly import even worse provisions back into the U.S. and, in the bargain, spawn a new and largely redundant international bureaucracy.”

“And you thought the notion of ‘world government’ was just a figment of the imagination of brain-fevered right-wing Republicans? Seems not,” explained Martyn Warwick in Telecom TV.

Let’s see how the public policy stalwarts fight it back.