Indo Pak relations: The signal from above hints new solutions 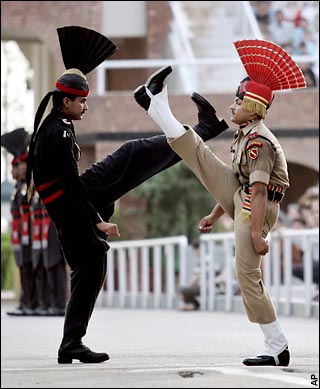 The Grand Trunk Road, which covers a distance of 2,500 km today, says Wikipedia, is one of South Asia’s oldest and longest major roads. For several centuries, it has linked the eastern and western regions of the Indian subcontinent, running from Bengal, across north India, into Peshawar in Pakistan. The road also passes through the only road boarder between the two most powerful South Asian nations, Wagah.

Wagah border point, often called the “Berlin wall of Asia”, is a ceremonial border where each evening there is a retreat ceremony called ‘lowering of the flags’. At that time there is an energetic parade by the Border Security Force (BSF) of India and the Pakistan Rangers soldiers. Troops of each country put on a show in their uniforms with their colorful turbans. Border officials from the two countries sometimes walk over to the offices on the other side for day to day affairs. The happenings at this border post have been a barometer of the India-Pakistan relations over the years.

Rohan Samarajiva, a recent visitor to Wagah, having inspired by a strange signal from above, proposes a better link to make the two nations closer, in Financial Express, India.