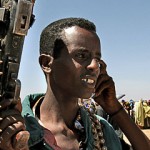 Amid rapid technological development, the competition to supply telecom services in war-torn Somalia proves that some complex businesses can thrive even in one of Africa’s dangerous markets. One of the largest telecom companies in Somalia, Hormuud Telecom, has annual sales of as much as US$40 million. Even “Mobile 2.0” is making inroads here. But the success of Somalia’s telecom sector shouldn’t come as such a surprise, according to experts. Telecom companies have also stepped in to provide missing infrastructure in countries such as Afghanistan and the Democratic Republic of Congo.

Svet Tintchev, World Bank expert on the telecom industry in developing countries, says, “The first ones who put in electricity generators in rural areas are the telecom operators … in a way, their leverage goes beyond pure telecom service.” Tintchev calls the local telecom companies “the economic enablers in Somalia”. Four main telecom companies now operate in Somalia and, despite competing for customers, they have cooperated with each other to maintain their networks and set prices to ensure that competition doesn’t become too cutthroat. Horseed Media writes quoting Wall Street Journal.