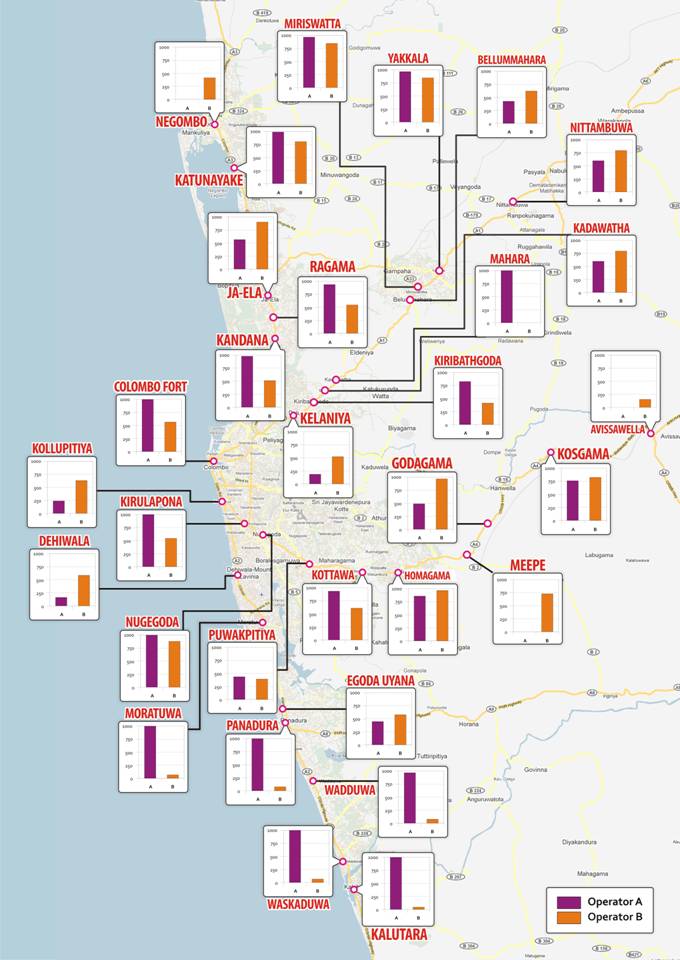 LIRNEasia’s preliminary round of mobile broadband quality testing in selected locations in Western Province unveils both hopes and issues. The good news is that the quality of both key pre-paid mobile broadband services is satisfactory, in majority of locations. However, unusual quality drops in several places indicates that this performance is not always a certainty. In general, a mobile broadband user in Western Province can expect a reasonable quality unless a rare issue like the distance from a tower or a higher number of simultaneous users hinders it.

LIRNEasia tested the broadband quality of the popular pre-paid High Speed Packet Access (HSPA) broadband connections of the two key providers. Packages offered by the third provider were not tested only because the operator prevented pinging from outside the network. Mobile test applications newly developed and released by Zamsana PLC, were used on mobile handsets for testing. To further simulate the true conditions the tests were done on public transport.

We saw little reason testing mobile broadband quality from fixed locations. It should be done on the move as that is how it is used. We could have done it from a car, but purposely did it from a bus to examine how conditions beyond our control can affect the performance.

Testers used mobile test applications developed for Symbian and Windows CE, the two most popular mobile operating systems used in Sri Lanka. They took both stationary and on the move readings at key points along four main roads from Colombo to Kalutara, Negombo, Avissawella and Nittambuwa. Apart from the download and upload speeds, the two most common parameters the tools recorded Return Trip Time or RTT (the time taken by data packets to reach a destination server and return), Jitter (the variation in RTT), Packet Loss (what percentage of packets were lost on the way) and the availability. The actual values were compared with the promises of the operators or, if no operator specifications were available against international standards.

Mobile broadband quality testing is a part of LIRNEasia’s broadband Quality of Service Experience (QoSE) benchmarking work. With its partner organization‐ the Indian Institute of Technology, Madras, LIRNEasia has been testing broadband quality since the beginning of 2008. The first tests were conducted manually. Later the test methodology was standardized and a software application was developed to get more accurate results. First round of testing was done only in Colombo and Chennai, but now the scope is expanded to cover New Delhi, Dhaka, Mumbai and Bangalore.

A direct approach to monitor Quality of Service Experience (QoSE) would be for the regulator to reach deep into the innards of the telecom network to install monitoring equipment and take remedial actions as per the licenses or the governing statute whenever the data indicate below‐standard performance, says LIRNEasia. Dearth of financial and human resources can be a key challenge for such an approach. The second approach is based largely on user activism. Educated users are expected to voluntarily contribute their time and computing resources towards building a performance database which in turn will be used in creating the bigger picture.

A comprehensive methodology to benchmark Broadband Quality of Service Experience (QoSE), based on the latter approach has been developed jointly by LIRNEasia and the TeNeT Group of the Indian Institute of Technology Madras (IIT‐M). While there is no barrier for regulators to use it, the methodology is largely user centric. Instead of depending on one time pinging, this methodology uses AT‐Tester, an open source software tool to monitor all crucial QoSE broadband metrics over a longer period, on both weekends and weekdays, covering peak as well as off‐peak traffic. The traffic is also monitored within segments, ISP, local and international.

(The figure above shows the average peak time download speed to an international server offered by the pre‐paid mobile broadband packages of the two key mobile broadband providers on a selected date. The ceiling is the promised speed of 1 Mbps. Speeds may vary depending upon the type of the handset, time of the day, number of simultaneous users connected to a tower and the weather conditions. Please click on image for an enlarged version.)