Patrick Gannon (President & CEO, Board Director at OASIS), in an email, “You provide some very interesting information on the open source Sahana effort and examples of using citizen volunteers for disaster situation reporting. The issue is being highlighted in the 2012 CAP workshop FINAL REPORT.” Get more details on the voice-enabled alerting and situational reporting project from the video: “Do you hear me?”

The Common Alerting Protocol (CAP) community has nick named us “CAP early adopter” (lol & \0/). This is because in 2005 when the CAP content standard was first released, LINREasia was quick to test it in the HazInfo project. University of Moratuwa Dialog Mobile Research Lab and Microimage produced GSM Remote Alarm Device coupled with the Microimage developed trilingual mobile SMS alerts and WorldSpace addressable satellite radios were the first to implement CAP, where by a CAP message entered through a web form would transform that message into bit streams to channel to the satellite and GSM devices.

The challenges have always been with the three language problem: Sinhala, Tamil, and English. Audio has always been the best source for providing complete hazard information in the local languages. CAP requires an <info> segment for each language and an additional one for each update of the cyclones trajectory. Assuming a cyclone alert is updated ten times including the final “all clear” signal”, Sri Lanka would need to manage thirty alert messages to properly inform the public through. We need this in short-text, long-text, and voice-text content forms. There are ninety objects that need to be managed, if we are to use a single input message for all-media alerting outputs in Sri Lanka. Unimaginable series of tasks for a human being to do all that within a thirty minute alerting window. The Sahana CAP Broker is designed to do exactly that; then aggregate and monitor CAP feeds in support of multi agency coordination. Perfecting such a solution has valuable lessons even for emergency managers from areas where their are Sri Lankan Canadians, like in Toronto.

LIRNEasia has been contributing the CAP research findings since 2005. The workshop is mainly co-hosted by the Organization for the Advancement of Structured Information Standards (OASIS), World Meteorological Organization (WMO), and the International Telecommunications Union (ITU). This year Environment Canada took the lead hosting it along with the usual co-hosts. The past representation: approximately 55 in 2011, a dozen in 2009, more than five dozens in 2008, and about twenty in 2006. In 2006, Gordon Gow presented the HazInfo work in the first CAP workshop. Then recently, 2012 had more than 80 participants from the public and private sectors. 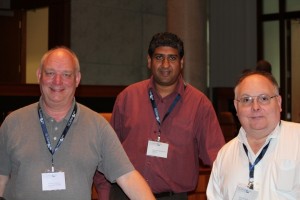 In my books, of all the workshops, conferences, and symposiums the CAP workshop remains to be my most liked policy discussion workshop with many challenges around of harmonizing technology, content, and social dimensions for delivering effective early warnings. Prof.Peter Anderson (Simon Fraser University) and Prof. Art Botterell (Carnegie Mellon University) were a couple of the people who instigated the need for a CAP standard; their meeting was in Singapore 2003. A privileged to be friends with them working towards a common goal.

The first CAP document, for the working group, was created by a close working colleague: Gordon Gow, with whom I have been doing most of my work in this subject. Based on his brief, Eliot Christian produced the CAP intro video. Eliot has been playing a leading role in promoting and stabilizing CAP. The intent is to translate that language in to as many local languages as possible. A step by step guide to digitally developing the localized CAP Introduction video can be found in the document: CAP video making instructions.

CAP 1.1 was the most complete standard. However, there were some disputes about changing certain indexing values such as the list of CAP alert info categories. These changes were reflected in CAP 1.2. Now comes CAP 2.0, which addresses geospatial referencing and transport of CAP through EDXL-DE. The DE package is there for you to address any package you want delivered to a destination. The paradigm shift from a device based approach to solving problems to an applications approach requires CAP to be technically harmonized; where by one can develop applications for standard devices like mobile phones opposed to costly non-beneficial specialized devices.

Google concerns, in its service to the public, were in determining how important an alert was to publish on their public portal? Other media would have the same concerns as well. When does one show an alert to the users? One thing for sure that it would have to be a public alert. The next logical step would be determine the priority level that is typically a function of the urgency, severity, and certainty elements. Most importantly, Google wants a synopsis of “what an alert means?” Typically the <instruction> element would contain a glossary and description in laymen terms.

TCS – CMAS was concerned with the after shock of a Cell Broadcast alert on the telecommunications networks that can cause subsequent unbearable traffic. Upon receiving the broadcast users would hop on the data lines or voice lines (calling 911 or exchanging SMS) to start connecting with peers. People with Internet naturally search for the event on the Internet.

Canada issues, approximately, 1500 alerts per year and USA 2500. Over alerting was a general concerns with end users turning off the CB channel, if the frequency of alerts were too much. The presidential alerts are one that cannot be turned off; telcos would have a lock on that channel. The CMAS alerts are not free, with the telcos billing the clients for each message.

The “all clear” message is an important one, not just for the citizens but also for the media to resume normal broadcasting programs. The “all clear” message is important for those CB message recipients to know that the surprising event has actually been changed to ineffective. Google and CMAS asked how long should the all-clear message be made available; i.e. should their be an all-clear-all-clear message be issued to wipe out the particular alert from the broadcasters buffer or “most recent” list. 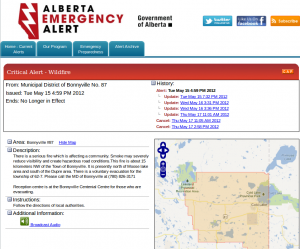 Alberta has the most advanced CAP enabled public alerting system: Alberta Emergency Alert. with feedback loops through self organizing twitter and facebook feeds. They had found cases of, in the event there was incomplete information, then twitter and facebook were activated to explain those gaps. One must be careful to avoid the “Garbage In Garbage Out” theory in order to not lose the faith of the citizens. Categorizing the information with #tags can help with the filtering of large volumes of tweets for example.

They have simplified the alert priority, typically defined by the Urgency, Severity, and Certainty, to Critical Alerts (red), Information Alert (yellow), and Test Alert (green). The Access Layer is controlled by user roles and geographic boundaries and not by individuals because people change; therefore, policies should be developed around agencies. The natural set of roles are the incident command centre roles; i.e. avoice complexity with a bare minimal set of who does what that are not in large numbers dictating errors. The Alberta Emergency Alert portal and services are paid for by the alerting agencies and the media casters.

Authorized local authorities can post an alert directly to the TV, Radio, Web, RSS, Email, and SMS messages. The TV and Radio stations invested their own resources to build CAP transformers that would read the CAP content then convert those to TV and Radio signals. CMAS has gone one step further by establish guidelines where by alerting industrialist can only play in their market, if and only if, they are CAP compliant. The Sahana CAP Broker, essentially serves the same features as what the Alberta solution does. The PHP Sahana Agasti build is now being ported to the Sahana Eden platform. The coding is done by a GSoC2012 student from India.

Before implementing a CAP Broker for publishing, subscribing, and aggregating the ecology must be set. The CAP readiness requires social contracts, economic and political system to agree on a CAP Profile. People must first decide on: “who pays for what?” and “what are the roles of funders and donors?”, then decide “where to invest?” For economies that require the local authorities to take responsibility of the citizens safety and are provided with limited budgets, they would optimize their alerting for the policy makers liking. One aspect would be to build diagnostics to determine a high reliability of the alert. A small and poor state or district would strengthen their decision making abilities to minimize on the false alarms, a typical Receiver Operating Characteristic (ROC) problem.