Internet for Dummies, ITU and ETNO 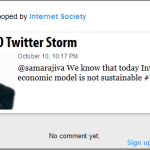 LIRNEasia has been vocal against the feudal doctrines of ITU and ETNO on dwarfing the Internet. The duo has staged a Twitter Storm on October 10. They have, predictably, failed to justify the command and control of Internet. While responding to LIRNEasia’s CEO Rohan Samarajiva, the ETNO chief Luigi Gambardella said, “We know that today Internet economic model is not sustainable” (Click on the thumbnail at left).