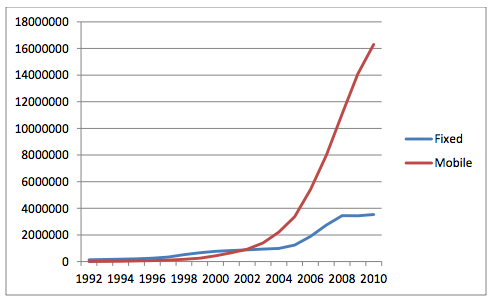 The validity of the proposition that extending the existing accounting-rate regime for international voice to Internet traffic in order to provide additional revenues to increase the build-out of broadband infrastructure in developing countries rests on the claim that the accounting-rate regime contributed to the extraordinary increase in voice connectivity over the past years by providing funds for building out the infrastructure.

As can be seen from the Figure above, the rapid growth that led to the elimination of the persistent waiting lists in Sri Lanka commenced in 2002-03. It was in this same period that the government liberalized the international telecommunications market, issuing multiple external gateway licenses. The inflow of revenues from the accounting-rate regime fell sharply. Yet connectivity exploded. This contradicts the claim that the accounting-rate regime was responsible for the rapid build-out of infrastructure that succeeded in providing voice telephony to almost all households in Sri Lanka.

It is not that revenues did not flow in under the accounting-rate regime. But they flowed to an incumbent operator dominating a market that was far from competitive. And significant revenues were siphoned off by grey-market bypass operators, leading the incumbent to spend its energies on litigation and other actions to defend an increasingly indefensible international exclusivity.

The decision to liberalize the international market led to the ending of litigation, confiscations and other actions that had given rise to multiple forms of uncertainty in the regulatory environment. The investment climate was thus improved. The liberalization created incentives for access-network operators to increase incoming and outgoing international revenues through commercial means, rather than by lobbying government or by colluding with those exploiting arbitrage opportunities. International telephone calls became affordable to all, including the millions of family members who needed contact with expatriate workers.

Before 2003, Sri Lanka was connected to the world only by the SEA-ME-WE 3 cable and by satellite. Seven years later several additional cables are operational, including SEA-ME-WE 4, FLAG, SLT-BSNL and SLT-Dhiraagu. It does not appear that the effective end of the accounting-rate regime depressed investment in international backhaul. In 2003 Sri Lanka had 700 km fiber optic backhaul capacity in a metro ring around the capital city and one outer ring. Seven years later, 12,000 km of fiber cables had been laid to connect all parts of the country, including post-conflict areas.

Broadband requires investment in international and national connectivity as well as in access networks. Sri Lanka appears to have done just fine without large inflows of settlement revenues; its success was based on creating the competitive conditions which gave rise to the correct incentives. Market reforms that reduced regulatory risk ensured that the required investments occurred and that companies implemented efficient operations and effective marketing. A World Bank study estimated that there were over two million broadband users, mostly connecting over mobile networks, in Sri Lanka in 2011. With more attractive and country-specific applications becoming available along with smartphones, growth is accelerating.

Sri Lanka had missed the business process outsourcing (BPO) wave that created export revenues and jobs in countries such as India and the Philippines. The liberalization of the international segment enabled Sri Lanka to attract several major BPO investments. By 2010, the BPO sector employed 13,000 employees in export-generating activities that yielded USD 98 million in revenues. Seven years after the international liberalization the combined Information Technology (IT) and IT enabled services sector was the fifth largest source of export earnings for the country.

In sum, Sri Lanka achieved almost universal voice connectivity at the household level after virtually seceding from the accounting-rate regime and is well positioned to provide its people with the low-cost broadband they desire. The liberalization of the international market also made possible the rapid development of the BPO industry. The causes of its successes lie in private investment and good management, enabled by market reforms. Settlement revenues came packaged with incentives unconducive to market innovation and investment.

Therefore, the fundamental premise underlying the argument for extending the accounting-rate regime to the Internet does not hold.