Syria exhibits the horrors of Internet under ITU 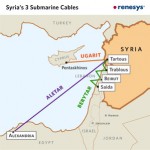 Syria has plunged into cyber darkness, as the Asad regime has pulled the plug on Internet gateways. Yet, the regime blames the “terrorists” for sabotaging the connectivity. Three submarine cables have landed in Syria (Click on the picture). The country is also plugged with Turkey through a terrestrial link. Therefore, even a drunken vagabond would not believe the Syrian minister of (mis)information. Because, all the four cables are to be cut simultaneously.

The timing of Syrian highhandedness couldn’t have been better for the defenders of Internet and worse for the ITU at the eve of WCIT 2012. The ITU has adopted a Resolution “inviting” all Member States to refrain from taking any unilateral and/or discriminatory actions that could impede another Member State from accessing public Internet sites and using resources. Secretary-General Hamadoun Touré has also urged everybody not to call ITU the villain:

This should send a strong message to the international community about accusations that ITU’s membership wishes to restrict the freedom of speech. Clearly the opposite is true. It is in this spirit – fostering an Internet whose benefits are open to all – that I would like to head into WCIT-12.

According to the ITU, Resolution 69 invites affected ITU Member States to report to the ITU Telecommunication Standardisation Bureau on any unilateral or discriminatory actions. The press release, however, doesn’t say what step ITU takes thereafter. It will be quite a fun to watch which Member State first blows the whistle of Resolution 69 and point a finger at Syria.