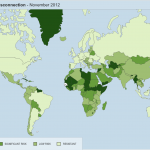 I have been studying how to make Internet affordable and resilient across the developing Asia. Excessive reliance on submarine cable is the bottleneck. My study shows how to overcome it by deploying fiber across the continent, exploiting the transcontinental highways.

But the control-freak governments, attending WCIT 2012 conference at Dubai, have deepened the crises of Internet. James Cowie of Renesys Corporation has categorized the countries being vulnerable to different levels of Internet shutdown risk (Click on the map).

Countries having only one or two international gateway (IGW) operators (Although Cowie calls them ISPs) are at “severe risk” of Internet disconnection. Countries with less than 10 IGWs have some significant risk of Internet disconnection. Markets where 10 to 40 IGWs operate are in fairly low risk of disruption. And the countries with more than 40 providers enjoy an extremely robust and resilient Internet. James says:

The key to the Internet’s survival is the Internet’s decentralization — and it’s not uniform across the world. In some countries, international access to data and telecommunications services is heavily regulated. There may be only one or two companies who hold official licenses to carry voice and Internet traffic to and from the outside world, and they are required by law to mediate access for everyone else.

Under those circumstances, it’s almost trivial for a government to issue an order that would take down the Internet. Make a few phone calls, or turn off power in a couple of central facilities, and you’ve (legally) disconnected the domestic Internet from the global Internet. Of course, this level of centralization also makes it much harder for the government to defend the nation’s Internet infrastructure against a determined opponent, who knows they can do a lot of damage by hitting just a few targets.

Remote islands and landlocked countries dominate the list of “severe risk” of Internet disconnection. Fragility of Internet among them largely attributes to their remoteness from conventional pipeline (submarine cables) of international connectivity. Landlocked Bhutan is totally dependent on the Indian carriers’ mercy. The landlocked Nepal has, however, acquired international route-diversity through China.

Another landlocked Afghanistan has, however, impressively emerged as the island of resilient Internet in the region. It splits international connectivity with ten different providers across neighboring Uzbekistan, Pakistan, Iran and elsewhere. James Cowie explains:

With good reason, most countries have gradually moved towards more diversity in their Internet infrastructure over the last decade. Sometimes that happens all by itself, as a side effect of economic growth and market forces, as many different companies move into the market and compete to provide the cheapest international Internet access to the citizenry.