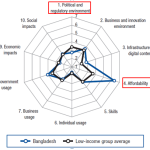 NTT Docomo has shrunk its shareholding, from 30% to 8%, in Robi Axiata – the third largest operator by subscriber in Bangladesh. The Japanese heavyweight has unleashed its fury at the regulatory malfunctions and questioned the government’s credibility.

Press release of Robi Axiata on NTT’s exit is the most caustic one in Bangladesh’s telecoms history.

The Docomo decision comes in the face of what it cites as an unfriendly regulatory environment and business uncertainties. The telecommunications industry is at a critical juncture in Bangladesh with many issues pending between the regulators and the government agencies, notably related to VAT rebate on 2G and 3G license and 2G licensing rules, which have not been addressed even in the recent circulars of the National Board of Revenue (NBR).

Rather than invest further in Bangladesh due to these long-standing uncertainties and potentially poor Return on Investment, Docomo’s management has opted to dilute its holding in Robi.

Robi has also said that the recent NBR circular is well short of the commitments made by the government in addressing treatment of additional VAT on spectrum and its expectations; thereby bringing in uncertainty about its participation in the 3G auctions.

Time will answer if Docomo retains or dilutes its remaining 8% stake in Robi. It is a blow to the government’s ambition for financial windfall through auctioning UMTS (3G) spectrum. Predictably the regulator remains unfazed, as Dhaka Tribune reports:

BTRC Vice Chairman Md Giashuddin Ahmed would not comment on the matter, saying he had no idea what Docomo or Robi had said. “We are trying to follow the best practices of the telecom world. And we have lots of scope left to improve ourselves,” Giashuddin said.

NTT Docomo entered in the country in 2008. At that time Bangladesh (45.4) lagged behind Cambodia (40.1), Pakistan (40.1), Thailand (29.1) and India (20.9) in terms of policy uncertainty (See page 70 of this report). Historically abysmal regulatory reputation of Bangladesh plummeted further when the government seized regulatory powers from BTRC and gave it to the telecoms ministry in 2010.

The then chairman of parliamentary oversight committee on telecoms, who is today’s Information Minister, called it a conspiracy against digital Bangladesh. Leading forum of foreign investors have also voiced concern about the regulatory shift. It has obviously shattered the mobile industry, which got entrapped in the bureaucratic crossfire between BTRC and telecoms ministry. As a result, the renewed 2G license of Robi Axiata – along with Grameenphone, Banglalink and Citycell in 2011 – was marred with contradictions and irrelevance.

Furthermore, BTRC has stopped Robi Axiata from directly sharing its competitors’ nationwide transmission networks. The operator was forced to purchase the same transmission capacity at higher cost from third party, as dictated by BTRC.

On the top of all these odds, the NBR has imposed 15% VAT on the spectrum fees of renewed 2G licenses. Airtel and state-owned TeleTalk remain exempted from this unique-in-the-world VAT until their licenses are renewed in 2020. The VAT issue has ended up in a series of messy litigation.

Bangladesh government also routinely ignores the law to realize various charges from the mobile operators. We have cited one example very recently. Accumulation of such acts has grossly compromised the government’s credibility. It has been captured in the “Global Information Technology Report 2013” of World Economic Forum. Among 144 countries, Bangladesh ranks 137 in “Political and regulatory environment” category of this report (Page 150).

Offering world’s one of the cheapest mobile service under a notoriously unpredictable regulatory regime (Click on the thumbnail at the top) is unpalatable to any credible investor. And NTT Docomo’s exit is a wake-up call for Bangladesh. Because her eastern neighbor, Myanmar, has been convincingly demonstrating a great deal of regulatory predictability. Following or ignoring “The writing on the wall” is the prerogative of Bangladesh government.