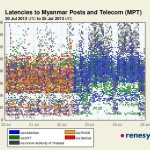 Myanmar has never been so shaky about getting disconnected before. It has happened after SEA-ME-WE3, Myanmar’s only submarine cable, was snapped at 13 kilometers south of the Irrawaddy Delta’s shore last week. “Works are being carried out to repair the fault as quick as possible in coordination with [a] Singapore-based underwater repair and maintenance team. It is expected to take about one month,” warned Myanmar Posts and Telecommunications (MPT), reports Irrawaddy.

Douglas Maduray of Renesys Corp. has graphically captured the disruption (Click on the image). Responding to my personal request, Douglas has explained:

This graph illustrates the impact of the loss of the SMW3 cable on the Internet in Myanmar. The failure resulted in the loss of PCCW and Starhub service for MPT which relied on on the cable. The remaining Internet service via NTT, HGC and CAT is coming through a terrestrial connection via Thailand. The diurnal humps in the blue/green portion of the graph are likely due to congestion as speeds get slower as more people are attempting to use the Internet and faster when the load is lighter.

Tourist businesses, which are dealing with a rising number of foreign visitors, said they struggled to carry out operations due to the current Internet disruption. “We have to use oversea phone calls now because the Internet is too slow. This is going to cost a lot of money for us,” said a staff member at Bravo Travel & Tour Company based in Rangoon.

Rangoon-based media group 7 Day News said their news gathering operations suffered from the poor Internet connection. Aung Thu Ra, chief reporter in charge of 7 Days’ newsroom, said journalists were unable to download photos and documents that were sent to them via email. “We got two event invitations yesterday, but we could not open the attached file,” he said.

Earlier we welcomed the debut of establishing Point-of-Presence (POP) by Hutchison Global Communications (HGC) in Myanmar. The problem is, HGC has entered in the country through a Sino-ASEAN terrestrial link named GMS Network. This unreliable infrastructure remains Myanmar’s backup of SEA-ME-WE3 submarine cable until SEA-ME-WE5 is commissioned within couple of years.

Myanmar’s crises over international connectivity and bandwidth will make Ooredoo and Telenor conservative in mobile broadband investments. Terabit Consulting has found that annual 1 Mbps Broadband subscription costs 133% of nominal per Capita GDP in Myanmar. Thanks to the state-owned monopoly over international gateway. Myanmar urgently needs to liberalize its international segment followed by diversifying the terrestrial networks beyond all frontiers. Otherwise, the funfair of mobile will become a flop show of “voice only” business.