Do Asian payphone locations need to be repurposed? 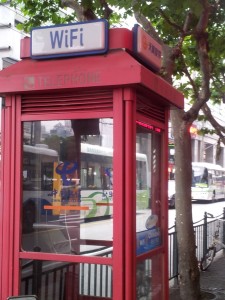 In June I posted some pictures from Shanghai of payphones that had WiFi signs on them. What the Chinese have already done, the City of New York is debating. The most controversial idea seems to be converting the payphone locations (which already have power) into electrical vehicle charging stations.

Sri Lanka has a minuscule number of payphones so this is not a big issue, but for Asian countries that are beginning to think about what to do, the first step should be to look at evidence on the question of whether payphones are obsolete. For the second step, with regard to certain cities in certain countries, the NYC process might have some ideas:

Given the amount of red tape involved, it could be years before the phone kiosks are repurposed, if the idea is approved. The future of the pay phone is to be decided through a formal request for proposals that the city said would be released in the coming months. In the meantime, the city says there are pilot programs with pay phone Wi-Fi at 13 locations and fast-cycle digital advertising on some kiosks around Times Square.

The design contest resulted in other ideas, including bike parking, a semiprivate booth for making quiet calls in a noisy city and an information center with weather, historical data and neighborhood information. Many entrants saw the kiosk of tomorrow as offering a convenient place to charge … a cellphone?