Another piece on Myanmar, in Myanmar 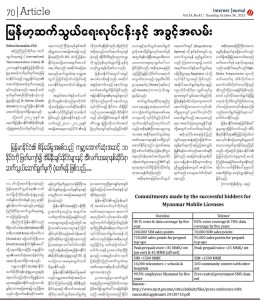 When I was interviewed by a journalist from the Internet Journal, said to have one of the highest circulations in Myanmar, I offered him a short piece I had written about Myanmar. It’s now been translated into Bamar (except for the table and my name).

The last few paras of the piece:

The government intends to establish a regulatory agency within two years. In the interim, the Ministry of Post and Telecom will function as the regulator. There are concerns both about capacity to regulate in terms of technical skills and also in terms of ability to exercise authority over the incumbent allied with a military-backed entity.

The government has started to build a domestic fiber network to cover its vast territory. It is essential to ensure that access will be based on cost-oriented pricing and the principle of non-discrimination.

The government has been stingy in the issuance of frequencies, despite the large expectations. This indicates that high-value frequencies may be occupied by the military. It is important that early action be initiated to refarm or reassign frequencies that are sub-optimally used.

The challenges before Myanmar are many. But, if the mistakes of its neighbors and peers are avoided and lessons learned, they can be surmounted.