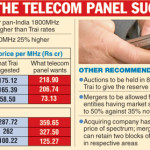 India’s Telecom Commission, composed of civil servants, is pushing for higher reserve prices of mobile phone spectrum. Their recommendation for 1800 MHz and 900 MHz prices are respectively 15% and 25% higher than what the Telecom Regulatory Authority of India (TRAI) has suggested for auction. India plans to conduct its next mobile phone spectrum auction in January 2014 to fork out estimated 110 billion rupees.

In September the TRAI has suggested to slash the auction reserve prices up to 65% after most of the operators have stayed away from bidding in the previous two auctions due to high reserve price. The Telecom Commission has, however, suggested to increase the spectrum prices by sweetening with attractive mergers allowance of a combined market share of up to 50% instead of the current 35% cap. The industry is unimpressed:

“We would have liked the commission to retain the price recommended by Trai which was done after proper calculation and study. There is no basis of what the TC (Telecom Commission) has suggested. But even with the 15 per cent increase in price, we expect good participation of operators in the auction,” COAI director-general Rajan S. Mathews said.

“Trai had appropriately suggested the prices sensing the market realities. TC’s recommendation seems to be not in sync with the market realities. This is likely to impact the market sentiments and the participation in the upcoming auction. The government needs to understand that telecom is a great enabler of GDP growth and socio-economic development of the nation,” said Hemant Joshi, partner, Deloitte in India.

Now a ministerial panel and the cabinet will finalize the reserve prices of mobile phone frequencies. Read the full report.