A lecture on disaster risk reduction was organized on Thursday 19th June at the Sri Lanka Foundation to consolidate knowledge on the subject in Sri Lanka and share it with other countries, private sector organizations and the general public.

The keynote speaker at the event was Dr Stuart Weinstein, Deputy Director of the Pacific Tsunami Warning Centre USA who spoke of the sparse seismic networks and the inadequacies in the tsunami warning system a decade ago. He went on to illustrate the advancements in tsunami warning with the number of warning systems increasing from one to four. Furthermore, the speed at which tsunamis can be detected has improved significantly. (Presentation “Advances in Tsunami Warning Systems Since the Great Sumatra Earthquake of 2004“)

Mr. Koichi Kotagiri from the Ministry of Internal Affairs and Communications Japan analyzed disaster management in Japan. He explained that the J alert system, among other methods, is in use to notify the citizens of an upcoming disaster.

Mr. Michael de Soyza of Dialog Axiata spoke of the Disaster and Emergency Warning Network (DEWN) which uses GSM technologies to transmit mass alerts through an early warning message. He stated that DEWN 2.0 is being devised at present for Andriod and IOS platforms and web apps.

Dr. Vinya Ariyaratne, the General Secretary of Sarvodaya analyzed the ability of communities to respond to disaster warnings. A holistic approach where individuals have the ability to engage in disaster resilient livelihoods and are empowered to take decisions once armed with necessary knowledge was deemed ideal.

A discussion on false alarms in early warning systems followed 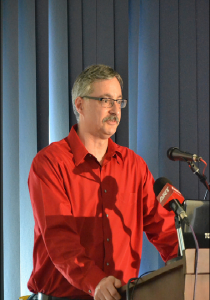