Prepaid for electricity in Sri Lanka 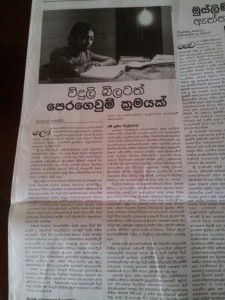 Would the prepaid model used for mobile phones services, do well in electricity? Will it benefit the poor? How will it benefit? Would it benefit CEB and LECO? Rohan Samarajiva is giving insight and answers to all these questions in  these articles here (in English) and here (Sinhala)

Every month CEB and LECO produce and distribute close to five million paper bills. Around half of these are for less than sixty units and are for small amounts. I am not sure if a proper costing has been done, but even if one assumes a low figure such as LKR 50 per bill, per month, the total annual cost of 1 million paper bills would be LKR 600 million, a not-insignificant sum. In addition, the companies would benefit from reducing bad debts and from having payments come in before the service is consumed.