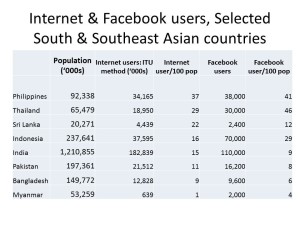 Common sense will tell you that you have to be an Internet user to use Facebook. But the SEA data refute common sense.

What are the possible explanations?

Something wrong with population numbers? But we used the most recent national censuses, except for Myanmar. In any case, the same numbers were used to calculate Internet users/100 and Facebook users/100. So this cannot be the source of error.

Is it possible that Facebook is reporting false data? We obtained these rounded numbers by going through the advertising door. This would be a serious offense since advertising rates are set on the basis of these numbers. We therefore do not think this explanation is valid, but we will check with Fb. Facebook does not ask people whether they use the service. They know.

It is possible that the Internet user numbers are wrong. We used the ITU method which we have expressed serious concerns about. But the sources of the ITU data for Indonesia, Thailand and Bangladesh are from the National Statistical Organizations and are likely to be from demand-side surveys.The others (India, Philippines, Pakistan, Sri Lanka, Myanmar) are ITU estimates. So unlikely that this is the source.

So the conclusion is that the cause is that Facebook users simply are not reporting that they use the Internet. This is what we found in our qualitative research. It is now appearing in the quantitative data too.