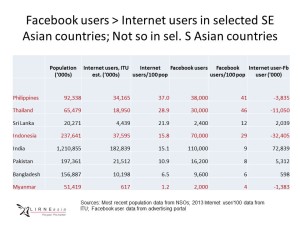 My previous post on Internet v Facebook users elicited a lot of responses. We also went back and relooked at the numbers carefully. The Myanmar census numbers came in (after 30 years?). Some changes were made.

Here are some responses.

Many people thought it was nonsensical to claim that Internet users < Facebook users. We agree. The problem is that the numbers of Facebook users reported by Facebook (based not on questionnaire responses, but on actual recorded use) is higher than what the ITU, using all its highfaluting methodologies, backed up by years of work and millions of dollars, reports. We are confident about the Facebook data. There is some overcounting, because a person can have more than one account. But surely this cannot explain 32 million Facebook users who are not Internet users. This would require every Indonesian Internet user to maintain 1.86 Facebook accounts. Highly unlikely. In the case of Myanmar, each Internet user would have to maintain 2.24 Facebook accounts. Multiple Facebook accounts cannot be unique to South East Asia. Why does it not happen in South Asia? And to a much lesser extent in the Philippines, the country with the highest level of Internet use among the set according to the ITU? The only conclusion is that the phenomenon we noticed in 2011-12 during qualitative research interviews in Java has gained enormous momentum. People just don't see the Internet. Their friends or relatives introduce them to Facebook, which allows them to keep in touch and even send messages to each other. That's it. If anyone asks them about Internet, they say they don't use it; if asked about Facebook, they may. But Facebook knows, without asking. Transaction-generated data trumps questionnaire responses. We believe the ITU methods have been overtaken by events and will have to be rethought.