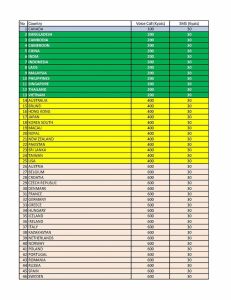 That’s the first page of the new international call charges announced by Telenor Myanmar. Compared to the dollar a minute (900 Kyat) charged by MPT prior to the entry of competitors, this is very good. The last time we collated international voice prices was in early 2012. But even in relation to that ancient table, one can see that the currently announced prices can come down further.

The single most important factor affecting international call prices is competition in the market for international calls. The second is the termination price charged by the operator in the country receiving the call. It’s a little difficult to charge retail prices that are below the termination charge that has to be paid to terminate the call. I am surprised that Hong Kong and USA are not in the cheapest band along with Canada. Those markets are generally among those with the lowest termination charges.

Given ASEAN’s stated intention of creating a single market, the member countries should also be in the lowest band.