visited many Government institutions, Telcos, ISPs, NGOs, and Associations. We interviewed over two dozen such stakeholders. These meetings with the professionals took place in Kathmandu and Chauthara, Sindhupalchok-district (the most reported deaths and damage). Each meeting had a new prospective to the experiences from the earthquake and their plans to rebuild bigger and better.

Police introduced twitter account (@nepalpolicepq) had been helpful to keep citizens informed. In some cases citizens were able to report crimes using the same twitter account. In one instance numerous reporting of a bus charging people 4 times above the normal price brought the criminals to justice. Facebook was instrumental to identifying those who were safe and for authorities to provide situational-reports.

Quakemap, initiated by Kathmandu Living Labs, received hundreds of reports. They arrived in batches which may have a possible correlation to the resuming time of telecommunications in those areas. Many of the validated reports received assistance from the humanitarian agencies. OpenStreetMap volunteers did a remarkable work with generating map products for various humanitarian agencies, who otherwise didn’t have any resources to guide them.

Disruption to electric power was the largest obstacle in managing the communications in all effected 14 districts. Some communities were in total darkness for several weeks; to the extent people had to chase away Leopards that stumbled down from the mountains through Chautara. Second cause for communications downtime was to blame on structural damage: antennas, heavy batteries, buildings collapse. These findings are also reflected in the Post Disaster Needs Assessment Report; where the electricity sector was affected by NPR 21,242 million and the communications sector with NPR 8,695 million in damages and losses.

Some communities had no communications for 3-5 days. Some would trek to find a signal. There was no source of information because the local Community Radios were also dysfunctional. However, their transmitters were unharmed but couldn’t resume broadcasting without electricity to power the signal. Radio stations were an important medium for receiving information on relief operations. Most importantly the radio stations were denouncing all rumors to remove panic among the communities

Rooftop antenna installations are a common practice in urban areas. Some of these were built during the insurgencies. Therefore, security was a concern. Theft is also another concern. People had looted the ISP and Telco batteries immediately after the earthquake. Limitations on access to land is another reason to rent rooftops of private homes. Some homeowners and neighbors are weary of allowing telcos and ISPs to install their infrastructure on their roofs. 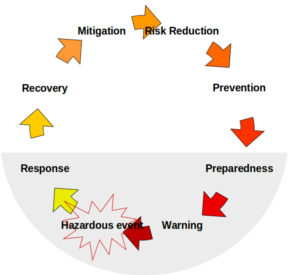 Focus of the study was on risk assessment, warning, and incident management

An ISOC and LIRNEasia mutually agreed response to the 2015 Nepal Earthquake was to study the survivability and availability of ICTs in Nepal. We will limit to ICT use in response including warning and the dependent preparedness elements.  The mission (Nov 24th – Dec 1st) related objectives were to:

The research team intends to collect damage/loss, downtime data for each of the telecos, ISPs, broadcast, electricity networks. If the data can be collected, then they will be analyzed to find correlating events of interest.