Consumer acceptance of more- than- voice (mtv) services: evidence from the bottom of pyramid in Bangladesh

This paper, authored by Muhammad Muazzem Hossain (MacEwan University, Canada) and Md. Raihan Jamil (University of Alberta, Canada) is based on an analysis of the Bangladesh data from the Teleuse@BOP4 survey conducted by LIRNEasia in 2011. Using this data, Hossain and Jamil explore factors affecting intention to use ‘more than voice’ or ‘MTV’ services among BOP mobile owners in Bangladesh. MTV services are defined as direct or indirect use of mobiles in services other than voice. The authors take a different methodological approach to the same question that LIRNEasia researchers explored in 2011 using the Sri Lanka, Philippines and Thailand data, as shown further below. Both studies show the importance of social influence, perceived benefits of use and factors relating to perceived ease of use and perceived acumen (e.g., prior experience level with mobile and Internet services).

Hossain and Jamil proposed and validated that consumer acceptance of MTV services is a function of perceived usefulness, perceived ease of use, social influence, perceived value, perceived acumen to use and facilitating conditions. These kinds of services are seen as key opportunities to enhance socio-economic benefits via mobile particularly by extending the reach of services, at lower transaction costs. The model proposed in this study is below: 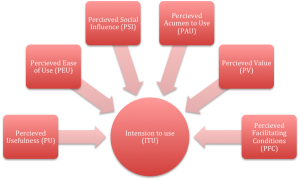 LIRNEasia’s analysis of the Sri Lanka, Philippines and Thailand data, published in Information Technologies and International Development showed similar results, but using a logistic regression to model the odds of mobile adoption. A comparison of the two analyses is given in the table below.

In a discussion on the two papers, LIRNEasia’s Big Data researchers discussed the possibilities of creating models through dynamic generation of features (essentially based on some base set of features) through a combinatory approach. Basically, merging data from large surveys with historical patterns of phone use big data was discussed and its feasibility was identified.

Links to the two papers are also provided below.