There was a popular emphasis on social media at INET Kathmandu. An entire session and an entire panel discussion was on the topic with various speakers telling their story. However, everyone realized the need for a robust internet for such platforms to work. While SMS was most effective during Nepal’s Earthquake response, data and voice were unstable. The use of social media during Nepal’s earthquake response came alive when other systems failed. 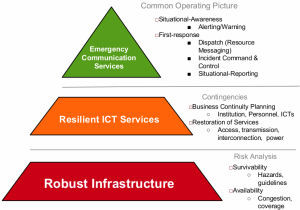 The key message that LIRNEasia delivered was that for any Information Technology to triumph during crises and emergencies (shown by the green pinnacle in image to the left), a sturdy foundation of ICT resilience is compulsory. Robust infrastructure is the shouldering basis for ICT resilience. Thus, roads for engineers to travel to fix ill-fated BTS and Transmissions and electricity to power the telecommunications are essential elements for keeping the ICTs alive.

The venn diagram illustrates the elements contributing to “Resilient Emergency Communication”. Robustness requires ensuring survivabilty and availability of the telecoms; especially a Government Emergency Communications (GECO). The GECO weaknesses are complemented by a Rapid Restoration of Access to Telecommunications (RREACT) program. The two complementing elements contribute to an effective Business Continuity and Disaster Recovery Plan (BC-DRP). 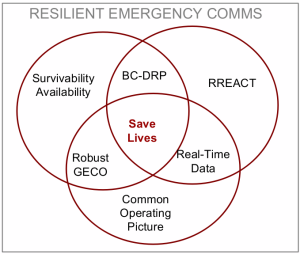 The social media real-time data streams provide rich information but also a lot of noise. Moreover, there is no exchange of data between the various platforms in support of sharing a common operating picture. That is what Sahana Eden did in Haiti in 2010! The Sahana platform brought all the data streams on to a single platform for generating meaningful outputs and sharing categorical information with various stakeholders.

Improving situational-awareness and first response with interoperable standards, significantly, improves the information sharing and institutional responsiveness to crises and emergencies. The social media and crowd sourced information utility in crisis response was evident from the Haiti Earthquake as well. In countries when formal knowledge sharing systems fail, freely available tools are appreciated and have taken a leading role in knowledge mobilization. 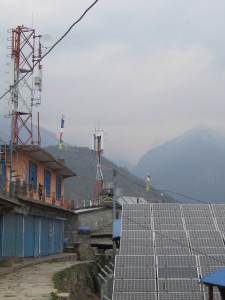 During a visit to the mountainous rural area in Pokara, Nepal, I made a few observations. Mobile data was none or very little inside the Annapurna Conservation Area. I could not connect to data in Uleri, Ghorupani, or Tadapani. Voice calls were the predominant choice by the locals in those areas. Every evening I would exchange SMS with my friend to let him know how I was doing.

Youngsters were not surfing the net but were taking photos with their Smart Phones. The Porters would listen to Tibetan music. Digital literacy was discussed, at INET, as a possible barrier to the uptake of social media tools.

The picture to the left was taken in Ghandruk. It is an indication how Telcos are struggling to cope with the fuel crisis. They have invested in solar energy with volumes of batteries. With the overcast in the mountainous regions, it is questionable as to how effective solar is?

Given that there are no motorable road, in those mountain villages, Mules have to carry diesel for the generators; and that can become costly. Main power shuts off at 8am and comes back on at 5pm. Power might be a factor determining the optimal services to offer under such economic constraints. Nepal has many challenges to overcome before they can achieve a level of readiness and ICT resilience.