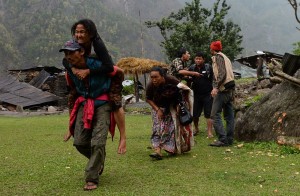 It was barely a month after LIRNEasia conducted a course on broadband policy and regulation in Nagarkot, that Nepal was affected by the Ghorka Earthquake. Our hearts went out for the people of Nepal who suffered from a series of tremblors, power and communication outages and many difficulties. We managed to convey some support for the immediate relief activities undertaken by our partner, the Internet Society of Nepal. But we concluded that what would be most valuable would be a contribution in the form of an assessment of how the communication system stood up to the earthquake and what lessons could be learned to make networks more resilient. That report, based on field visits and extensive consultations with those who directly experienced the problems, is now public here. It was presented in draft form at the iNet conference organized by ISOC Nepal in March 2016.

Nuwan Waidyanatha, Senior Research Fellow at LIRNEasia, kindly consented to undertake this challenging assignment. He was among the first to provide relief to those affected by the 2004 Indian Ocean Tsunami on the East Coast of Sri Lanka. Subsequently, he managed LIRNEasia’s large HazInfo project focused on early warning supported by the International Development Research Centre of Canada in 2005-07. Stemming from that project, he generated many publications in the Disaster Risk Reduction field. He was one of the pioneers in deploying the Common Alerting Protocol. Through his deep involvement in the work of the Sahana Foundation he has also achieved recognition as an expert in the relief and response phase of disasters. He is much in demand as a trainer.

We at LIRNEasia have always responded to disasters in two ways. The first is as human beings who try to reach out and help those whose lives have been shattered. The second is in using the disaster as an opportunity to learn how to reduce risks in the future and to provide relief and response more effectively. We believe that the comprehensive study conducted by Nuwan Waidyanatha is exemplary of the latter. He has successful melded his extensive knowledge of the subject with observations on the ground to present actionable recommendations that are of value not only to Nepal but also to similarly situated countries. We hope that it will contribute to actions that will result in the saving of lives and reducing harm to livelihoods.