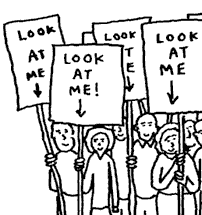 It was Herbert Simon who first talked of the attention economy: “Hence a wealth of information creates a poverty of attention and a need to allocate that attention efficiently among the overabundance of information sources that might consume it.”

Now we see what the value of attention is. Ours is way below USD 11.86, but not zero and rising.

What this means in dollars and cents for Facebook can be seen in numbers contained in its first-quarter financial results, released on Wednesday. For the United States and Canada, Facebook pulled in $11.86 in advertising revenue per user in the first quarter. That’s what advertisers are willing to pay to catch your attention as you argue with your friends and relatives over Donald Trump or coo over baby pictures or both.

Facebook’s revenue was up over 50 percent from a year earlier, while its net income soared nearly 200 percent. Its stock leapt on Thursday as the wider market fell. Facebook’s blowout financial performance stood out because Apple, Twitter and Alphabet, Google’s parent company, all reported disappointing first-quarter numbers.

Facebook is doing well because it occupies a huge sweet spot in the connected world, perhaps an even bigger one than Google owns.

Responding to the COVID-19 crisis has been difficult for many. Its volatile and uncertain nature has made planning even more challenging.

The theme of this year's SIF was "Mobilising for Digital Resilience – a free, open, and secure internet in the shifting landscapes of the pandemic". The opening panel set the stage for discussing issues that fit under this topic, and will be followed by 2 days of further panels that explore each issue further.