A4AI is needed in Detroit 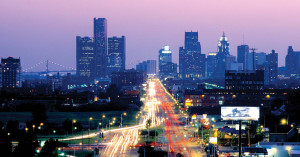 I could not find a better illustration of the positive externalities of broadband than this story about Detroit, a once great American city:

Detroit has the worst rate of Internet access of any big American city, with four in 10 of its 689,000 residents lacking broadband, according to the Federal Communications Commission.

While difficulties in connecting to the Internet in rural areas are well known, Detroit is becoming a case study in how the digital divide in an urban setting can make or break a recovery.

Bridging a Digital Divide That Leaves Schoolchildren Behind FEB. 22, 2016
The deficiency of Internet access in Detroit is particularly glaring given that broadband is now considered as basic as electricity and water. Last year, the F.C.C. defined high-speed Internet as a public utility and made connecting all American homes to the web a priority. Yet many Detroit residents cannot pay for the service or a computer to go online, or for mobile data plans, which enable 24-hour Internet access anywhere over smartphones.

“I was in pain visiting Detroit, seeing how so many pockets aren’t part of the opportunity of broadband and are falling behind,” said Mignon L. Clyburn, an F.C.C. commissioner who visited the city last October.