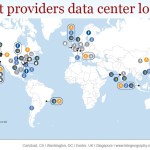 “Either we disrupt or we get disrupted,” warned Cisco’s outgoing CEO John Chambers in his last speech to the industry last year. He also said that 40% of companies will be dead in 10 years. “If I’m not making you sweat, I should be,” Chambers quipped. He was referring to the rising tide of innovation that breaches the dyke of comfort zone where conventional verticals reside.

Less than a year after Chambers’ keynote, GSMA has reported how the mobile industry has failed to secure a sizable share from $3.5 trillion global Internet economy in 2015. And the future of mobile, in terms of monetizing the Internet, is not bright either.

Ten days after the GSMA’s disclosure, on 27 May 2016, Microsoft, Facebook and Telefonica have announced the building of Marea cable. This 160 Tbps trans-Atlantic cable will link Virginia Beach (Virginia, US) and Bilbao (Spain). Its construction will commence in August and the target date of completion is October 2017.

Microsoft, with $102.6 billion cash in hand, ranks second in Moody’s list of cash-rich U.S. non-financial companies. Facebook is number 18 in this list with $18.4 billion. Both the affluent Internet companies and their peers have been consistently investing in submarine cables to cut the cost of synchronizing respective data centers.

Clicking on the thumbnail (above) and reading this article of TeleGeography’s Alan Mauldin will clarify why the Internet companies fancy global infrastructure.