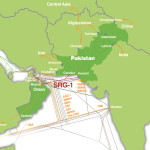 Multinet Pakistan, an Axiata company, and state-owned Omantel are deploying a new subsea cable system, dubbed Silk Route Gateway (SRG-1). It will have two pairs of fiber with a design capacity of 10 Tbps each. The system will be commercially launched by the end of 2017.

The SRG-1 will stretch over one thousand kilometers between Muscat and Karachi, with a planned extension to link the newly built deep-sea port at Gwadar (Pakistan). That will make it the country’s first submarine cable with double landing stations. Gwadar and Karachi, being 289 nautical miles apart, will also end Pakistan’s historical risk of operating all submarine cables via Karachi. A new terrestrial link across the 626 km. of Makran coastal highway, connecting Gwadar and Karachi, will make Pakistan more resilient.

Most importantly, the prolonged duopoly of PTCL and Transword will be ended by SRG-1. This new kid on the block is expected to slash the prices of international capacity and IP transit bandwidth.

The new cable, with diverse route and double landing stations, will strengthen Pakistan’s supply line of international services to the landlocked Afghanistan and Central Asia. By virtue of its termination at Gwadar, the SRG-1 will certainly be the Chinese carriers’ gateway to the Persian Gulf.

Silk Route Gateway 1 (SRG-1) is being politically touted as the submarine reincarnation Silk Road, an ancient network of trade route linking Asia with Africa and Europe. This cable system will offer Pakistan optimal connection to Asia, Europe and the Persian Gulf regions through the 15 major global submarine cable systems from Oman.

According to TeleGeography, Pakistan’s 64% international bandwidth is with France, Italy Germany and the UK combined. Singapore accounts for 14% followed by China (12%) and Middle East (10%). SRG-1, once activated, is expected to disrupt these figures.