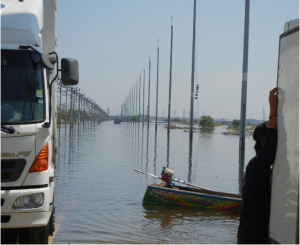 The report, published in April 2016, covers a range of issues, but is perhaps unique in its emphasis on the potential of big data.

This report highlighted some emerging technologies such as the use of Big Data for DRM purposes. It is one that is still being explored but has so far demonstrated immense potential. However, along with it come significant challenges that have to be overcome in order to truly benefit from real-time use of MNBD. Utilizing new sources of data such as MNBD and even social media for assisting in predicting emerging trends and shocks as well as for building greater resilience is still an emergent field. However, prior to discussing the pathways to improving the state of the art in utilizing such datasets, the more immediate concern is how to make such data accessible to researchers, planners, and others for public purposes. As privately owned data, they are not very amenable to the open data initiatives that are currently popular in the public discourse.

There are also privacy concerns that emanate from such data sharing. Further, there are potential competitive implications for operators should their data be shared (even after anonymization). The result of these privacy and competitive concerns are that service providers are generally reluctant to share their data. When they have, it has often been (with some recent exceptions) with a few select researchers and institutions under lengthy Non-Disclosure Agreements (NDAs). Even after MNBD gathered renewed interest in the public discourse after the recent Ebola outbreak in West Africa, GSMA (the global lobbying group for most GSM operators in the world) came up with recommendations that suggested in-house analyses rather than data sharing.

The question then is how to facilitate greater data sharing by service providers for public purposes, while accounting for concerns related to privacy and competition? As a regulated industry, MNOs operate under a license, which could theoretically be argued is a form of concessionary contract to deliver a public service, and as such, licenses could theoretically include provisions for data sharing. An alternate and less intrusive approach is to develop bottom-up, pragmatic, cooperative arrangements with government and private actors.