Insurance as a critical element in disaster response toolkit 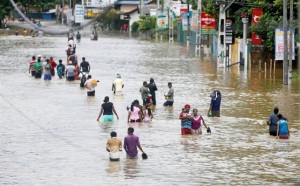 We have been kicking around the idea of giving insurance a greater role in disaster risk reduction and response since 2005. Just a few months back I raised the issue at a workshop at UN ESCAP. In an interview with a Sinhala newspaper last week, I said it was a pity we were not anchoring compensation for flood damage on insurance principles and just giving out money. But here is good news.

Too often, we criticize governments for sins of omission and commission. But the government of Sri Lanka gets only our praise for this particular action of buying insurance.

Around the world, insurance is increasingly being looked at as an effective way to curb the blow of more frequent or powerful disasters brought on by climate shifts. Policies ranging from regional-level risk pools, involving groups of countries, to single-farmer policies aimed to helping growers get going again after a total loss, are taking off in regions from the Caribbean to sub-Saharan Africa.

The May disaster left 89 dead, while 102 are listed as missing by the Disaster Management Center (DMC). That authority also calculates that 691 houses were destroyed, while about 4,900 sustained damage during a week of heavy rain and landslides.