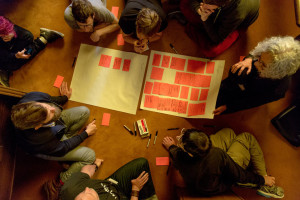 It was in the 1990s that Larry Lessig put into beautiful form an idea that was bubbling up all over the place among people thinking about emerging technology. This was the idea of West Coast Code versus East Coast Code. Both regulated what could and could not be done on various tech-mediated spaces. But East Coast Code sought to do so through law, courts, regulatory agencies and the old paraphernalia of the regulatory state. There are obvious problems in this approach. West Coast Code embedded the rules in the design itself.

Back then, many of us thought the existing design of the Internet optimized opportunities for decentralized initiative and freedom as opposed to the hierarchical design of the public switched telecom network (PSTN). But the commercial and national security interests used the Internet for their own purposes. Berners-Lee and others are beginning to think of a redesign.

So on Tuesday, Mr. Berners-Lee gathered in San Francisco with other top computer scientists — including Brewster Kahle, head of the nonprofit Internet Archive and an internet activist — to discuss a new phase for the web.

Today, the World Wide Web has become a system that is often subject to control by governments and corporations. Countries like China can block certain web pages from their citizens, and cloud services like Amazon Web Services hold powerful sway. So what might happen, the computer scientists posited, if they could harness newer technologies — like the software used for digital currencies, or the technology of peer-to-peer music sharing — to create a more decentralized web with more privacy, less government and corporate control, and a level of permanence and reliability?

“National histories, the story of a country, now happen on the web,” said Vinton G. Cerf, another founder of the internet and chief internet evangelist at Google, in a phone interview ahead of a speech to the group scheduled for Wednesday. “People think making things digital means they’ll last forever, but that isn’t true now.”