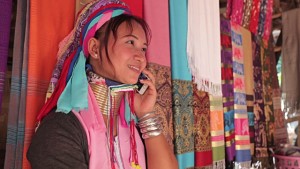 A box in 2015-16 Affordability Report of the Alliance for Affordable Internet includes a box on gender which begins thus:

By March 2015, just over a year after liberalising their ICT sector, 40% of Myanmar’s population between the ages of 15-65 owned a mobile phone. Yet, women were 29% less likely to own a mobile phone than men. To understand the reasons for this gender gap in mobile phone ownership, GSMA and LIRNEasia conducted a qualitative study among 91 men and women in Yangon, Myanmar’s largest city, and Pantanaw, a small town in the southwestern part of the country.

The research showed that women in Myanmar play a prominent role in the management of household finances — even if they do not earn anything themselves — and are frequently involved in the financial decision to purchase a mobile phone for the family. Yet women’s access to this family mobile phone is often limited because the phone tends to travel outside the home, with the person who is deemed to need it the most. Since activities outside the home are more often undertaken by men, this mobile access and usage gender gap is exacerbated. As such, getting a second mobile phone into the household (which has a higher likelihood of staying inside the household) seems key to increasing women’s access and usage.

The link in the A4AI report is broken. It can be accessed here.

RFP: A nationally representative study on Impact of COVID-19 on households and the workforce in India

We are inviting Proposals from potential Bidders to conduct a nationally representative study on Impact of COVID-19 on households and the workforce in India.