MPT seeks to differentiate itself through zero rating 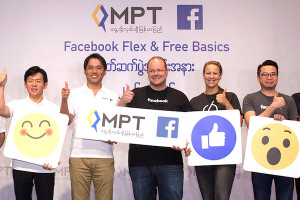 MPT is the former monopoly supplier and still has the largest customer base. But their new managers have reason to be worried whether they can hold to the customers. Telenor is a major player skilled in implementing the budget telecom network model and is nipping at MPT’s heels. Ooredoo has deep pockets. When the VietTel led fourth operator gets going, MPT can expect even more pressure.

MPT partnered with Facebook in June to let customers use some features of the popular social network without any data charges. Facebook users in Myanmar doubled over the year through May to 10 million. MPT has also enlisted Japanese messaging software provider Line as a partner in app development and is working to improve customer support at roughly 120 service locations nationwide.

“Our success will depend on how much we can differentiate ourselves in data plans and customer service,” said Koichi Kawase, chief commercial officer of MPT’s joint operations with Sumitomo and KDDI.

There is still more change to come. The Myanmar government announced Monday that it will auction 2,600MHz spectrum in October. The three existing carriers now use the 900MHz and 2,100MHz bands and are considering bidding on the newly available spectrum to strengthen service.

The companies are also building up infrastructure and are expected to double the number of base stations from 8,000 at the end of 2015 to 17,000 sometime in 2017.