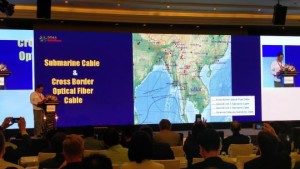 According to the government as reported by Eleven, there has been much progress made on beefing up Myanmar’s international backhaul. The report does not say what the terms and conditions of access to the backhaul is and whether the necessary licenses have been granted to make possible the use of AAE1 and SEA-ME-WE 5, which were initially conceived of as providing China with an alternative to the Malacca trap.

Myanmar has expanded its fibre optic cable to 31,000 kilometres this year, according to the Ministry of Transport and Communication.

Myanmar had only used the SEA-ME-WE 3 fibre optic cable previously, but people in the country will be able enjoy the benefits of the SEA-ME-WE 5 and AAE1 cables soon.