Some considerations to make “Kandy” a smart city

Some time ago, Minister of Urban Development and Water Supply Rauff Hakeem announced “Kandy” would be developed as the first “Smart City” in Sri Lanka. While many projects are taking place in Kandy such as Strategic City Development Project, Greater Kandy water supply project, it is important to assess the concept of smart city, and how it can be applied to Sri Lankan context.

“Smart City” as a concept emerged during the last few decades. It’s been widely marketed and adapted by private organizations as well as public organizations in cities, due to the introduction use and adaptability of information and communication technology (ICT). At the moment, more people lives in cities compared to rural areas. In order to sustain and survive, cities need goods and services as input. As a result of the processing these inputs, cities creates outputs, and waste is a part of this output. This waste generation contributes to negative externalities, which results in socio economic issues in a given locality. To face this challenge and overcome it, “smart city” concept was introduced and adapted by urban planning professionals around the world.

Few characteristics of a smart cities are, networked infrastructure of a city that facilitate its social and cultural advancement and political efficiency, emphasis on creative activities, business guided urban development to stimulate cities urban growth and natural environment as a part of the strategic component of cities future.

Figure 1: Components of a “Smart City” 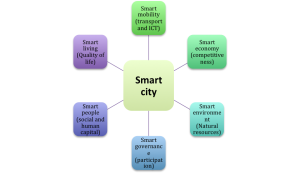 Successful implementation of a “smart city” initiative is the responsibility of the government sector, private sector, and academics as well as the civilians of the locality. Few conditions of the success of a “smart city” initiative are the need for a proper coordination among all stakeholders, integration of data systems in the city, good governance and smarter decision making in the city, adapting new planning and design tools and methods and online communications for participatory decision making.

Even though multiple stakeholders get together to plan and implement smart city initiatives, progress of the applicability of this concept to modern cities are slow. The reasons underlying this is information failure, coordination failure, the use of wait and watch by public and private entities, high cost of funding and rollout, fear to adapt new technologies and low level of trust in data systems and privacy.

“Smart city” concept facilitates speedy development and growth and increases the quality of life of the people living in cities. As the planners and policy makers of Sri Lanka are trying to adapt this concept to Sri Lankan cities starting from Kandy, assessing the applicability of this concept and identifying the potentials and barriers of adapting this concept is important. Information and Communication technology plays a key role in “Smart cities” and the latest trends such as “Internet of things” are adapted in these cities. If the concept is to be adapted in Sri Lanka, urban planners and policy makers should visualize the future and adapt technologies accordingly. Making Sri Lankan cities “smart” should be a joint effort, where government, private organizations and civilians plays equally important roles in the process. Just using the word “smart cities” because our neighbor India has initiated a major program to create Indian cities “smart” doesn’t necessarily make Sri Lankan cities “smart”. We need an action plan with all partners, government, policy makers, private organizations, planners and researchers in it.