Grand challenge: How to minimize impact on livelihoods from disasters 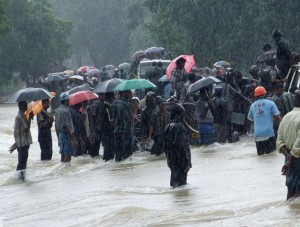 I am at the University of Washington in Seattle discussing grand challenges in tech policy. When asked to identify a grand challenge in the tech policy space that was uniquely relevant in my own country, I proposed action to minimize impact on livelihoods as described in the piece I wrote after the April Kelani river flood:

As I read general alerts of the type quoted above, I wonder how a person could react. So for example, what do I do, as a resident of Kegalla District, when I am told there is a risk of landslides in the District? For specific action, I would need a specific warning, such as “there is a 75 percent probability of this particular hill looming over my house sliding down if there is more than one hour of continuous rain.” I would need to know where to go. Rather than a general message that the Kelani River is rising, I would need a specific message that it will rise 2 meters at around 6 PM on a particular day in my neighbourhood.

It is possible, using sensor arrays and models, to make such predictions. It is also possible to micro-target such messages to specific communities using present day capabilities of ICTs. There is no point in telling people in Hanwella what is likely to happen in Kaduwela. All that broad dissemination of specific messages will do is cause people to stop paying attention.