LIRNEasia’s concerns re the quality of ITU’s way of counting Internet users are well known. In addition to relying on arbitrary multipliers, they are slow in producing the data. It’s now the second half of 2016, and the most current data from the ITU is from 2014. In a rapidly changing sector like ICTs, this is ancient history.

So I hope I will be forgiven for claiming that Facebook user numbers which are from 2016 are a better indicator that ITU’s obsolete and questionable indicator. There may of course be a few Internet users who are not Facebook users, but I would argue that it is common sense that every Facebook user is by definition an Internet user, and therefore, it is reasonable to use that as a floor.

The interesting observation is that in a very short time, Myanmar has leaped over all South Asian countries (possible exception is the Maldives). In one sense, it is simply behaving like a South East Asian country, which are generally more into social media than South Asia. But it is still extraordinary.

According to the 2015 data from GSMA Intelligence, Myanmar has already overtaken Pakistan in SIMs/100 and is about to catch up with India. 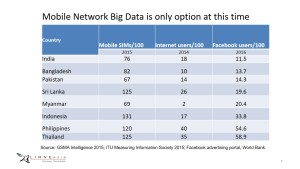