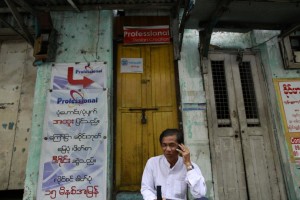 All market projections in developing countries have been wrong, and all wrong in the same way: they have underestimated demand. This was true for voice, then for data, and now for 4G.

The sharp increase in 4G usage is the second time the Myanmar market has taken Ooredoo by surprise, Mr Meza said. The first was the speed of smartphone penetration across the country after the company first start operating in 2014.

When the Qatari firm entered Myanmar it decided to concentrate on the urban centres and on higher-value customers with heavy data usage.

But the subsequent country-wide surge in smartphone and data usage left Ooredoo without a distribution network able to keep up with wider demand, he said.

The company has since adopted a mass-market approach to cater to widespread adoption of smart phones and data. Mr Meza said that 80pc of Ooredoo’s 8.2 million Myanmar customers now use data, and estimated the split between urban and rural areas at 50-50.