Is low digital literacy in Myanmar a result of no government programs? 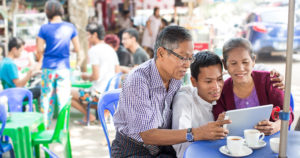 Despite a few errors such as the claim that Ericsson had “subscribers” (said to be 35 million), Buzzfeed had an interesting story on Myanmar’s experiences in fast takeup of Internet.

Myanmar has a “low media and information literacy rate,” according to an interview given by an unnamed official in the United Nations Educational, Scientific, and Cultural Organization (UNESCO) to the Myanmar Times. Often called “digital literacy,” the term measures how well people using the internet understand what they are doing, and how to stay safe online. Countries like Myanmar, which come online quickly and without many government-backed programs to teach safe internet habits — like secure passwords and not revealing personal details online — rank among the lowest in digital literacy. They are the most likely to fall for scams, hacks, and fake news.

Facebook says it’s constantly thinking about ways to improve digital literacy, and that it will soon release a security awareness campaign designed specifically for Myanmar, and that it’s worked with local civil liberty groups to publish a pamphlet that includes a translated and illustrated version of its community standards.

Our observations support the claim that people in Myanmar have a lot to learn about the Internet, passwords, email, etc. However, I would question the claim that the cause is the lack of “government-backed programs to teach safe internet habits.” I do not know of any country, perhaps other than Korea and Singapore, where such programs were offered, and had an impact. The sheer speed of take up is a better explanation.