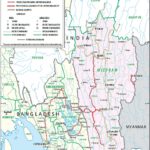 Myanmar is the rising star in global telecoms market and anything new hits the headlines. Bharti Airtel’s claim of activating a terrestrial optical fiber cable link between India and Myanmar is one such example. An undisclosed sum has been reportedly invested in a 6,500rkm (route km) terrestrial link. It will be connected to Airtel’s landing stations in Chennai and Mumbai. Ajay Chitkara, the company’s director & CEO (global voice & data business) told the Economic Times:

‘The terrestrial cable link is a strategic fibre asset for Airtel in the SAARC region, which will enable the company to offer robust end-to-end connectivity solutions in Myanmar, which is seeing rapid uptake of digital services as one of the last growth frontiers in Asia.’

Economic Times, a national broadsheet, has blindly reproduced Airtel’s press kit. The newspaper has not inquired about the route of this terrestrial network. Because, right of way is the most critical segment of any international telecoms link regardless submarine or terrestrial. Economic Times’ editorial ignorance may be ignored. But the online industry news outlets like Voice & Data and Mobile World Live should have been careful while taking the cue from Economic Times.

Currently no functional road network exists between Myanmar and India. In 2014 the World Bank has undertaken a $107 million road project to link Myanmar, Bangladesh and India (click on image to enlarge). Once completed in 2020, it will be a reliable right of way to plug Myanmar with the SAARC countries. Until then, any claim of cross-border connectivity remains a cheap marketing hype.